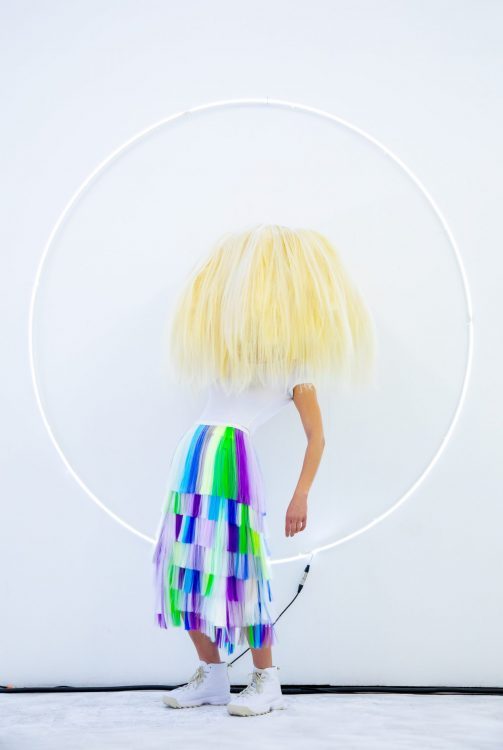 Demeter, the goddess of fertility, loses her daughter to Hades, the god of the underworld. Inconsolable, she lets her nature decay. In order to stop this extinction, goddess Baubo shows her solidarity: she lifts her skirt and shows Demeter her vulva. But instead of being celebrated as a heroine, Baubo’s empowerment is censored as obscene witchcraft. Like Baubo and Demeter, we want to build sisterhood with each other and with the audience and invite you to a performative temple of salt, music and sound. Under Baubo’s huge, billowing skirt, her obscene jokes and Demeter’s laments, we invoke the power of the female body between myth and future scenarios.

Patricija Katica Bronić, born 1991 in Hagen, graduated in 2018 with a Master’s degree in Expanded Theater from the Bern University of the Arts. During her studies, she worked with Mirko Borscht, Alexander Giesche, Talking Straight and Hans-Werner Kroesinger, among others. In cooperation with Theater Basel and director Kevin Rittberger she performed in the series “Community in Progress”. From 2011 to 2015 Patricija studied theater and media at the University of Bayreuth. During her studies, she realized various theater and short film productions both as an actress and as a producer and worked at the film production company agatafilms&exnihilo in Paris. Patricija is a member of the Ensemble Network.

Hanna Valentina Röhrich, born 1991 in Mannheim, graduated in February 2017 with a Master’s degree in Expanded Theater from the Bern University of the Arts. In 2016, she received a grant  from the Armin Ziegler Foundation and was a semi-finalist for the Swiss Young Talent Award Premio for Theater and Dance. After three years as a permanent ensemble member at the Junge Nationaltheater in Mannheim, she is now a freelance actress and playwright in Switzerland and Germany since September 2020. She has worked with Hannah Biedermann, Manuel Moser, James&Priscilla, Monster Truck, Niklaus Helbling, Kevin Rittberger, Hans-Werner Kroesinger and Mirko Borscht, among others. Her project for young children, “Dufte Düfte”, was selected for the KinderKulturTreff MINI of the Swiss initiative Lapurla. She is nominated for the Retzhofer Dramapreis 2021 in the category youth with her play “Konradine und Effi – die Geschichte einer Freundschaft”.