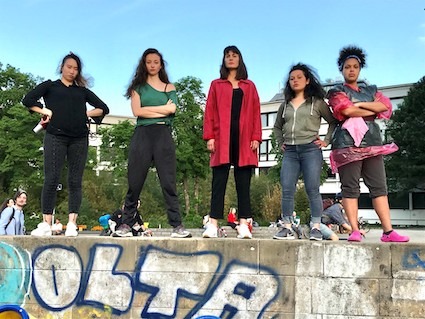 Who are the descendants and cultural heirs of Medea? We are! We nurses, cashiers, hairdressers, cleaners and actresses who are not seen or heard because of our origin, skin colour, sexual orientation or political views. The ones, on whose backs politics is made, but who are not part of it. But suddenly we are considered systemically important to society. Now we are freeing ourselves from our ascribed functions and are uncompromisingly and demandingly coming out to the public. We, Medea’s daughters, continue to set out for new shores, bring fresh wind and unknown practices, are the engine of society and the spark of truth!

Corinne Eckenstein The director, choreographer, author and actress was born in Basel and trained as an actress and dancer at the Nat Horne Musical Theatre School, New York, and Dell’Arte International School of PhysicalTheatre, San Francisco. She began her theater career in 1979 as a teenage performer at Theater Basel and junges theater basel, to which she later returned as a director. She has lived in Vienna since 1990. In 1995 she founded the theater FOXFIRE. Since 2004 she has been working at the Dschungel Wien.