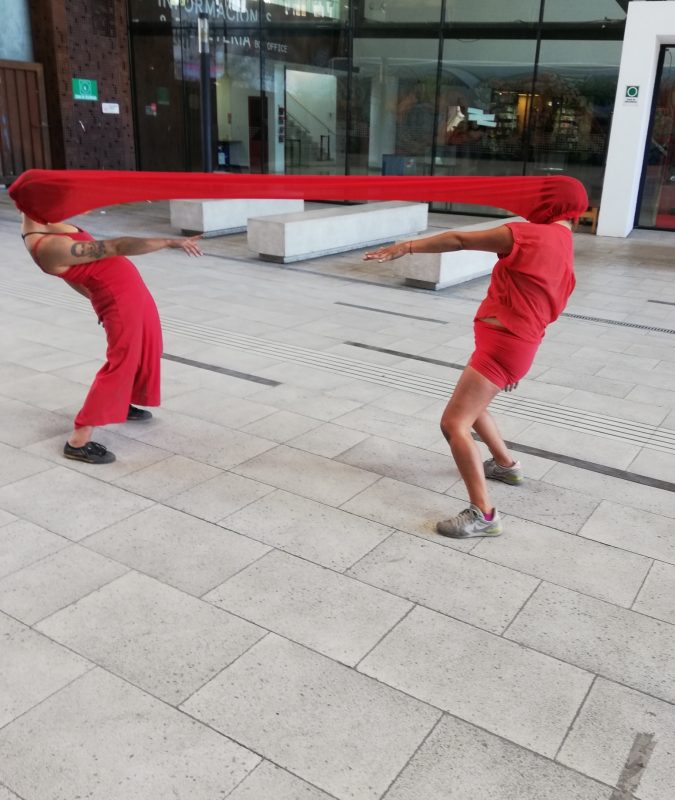 “UNA A UNA” is a performance that invites womxn to explore a relational object – a red cloth that holds two heads together. Participants are invited to enter into a state of synchronicity where each is a mirror and echo of the other. Enter the temporality of listening, where the dimension between one body and the other becomes meaningful to create an architecture of connectedness that intervenes in the urban architecture – an emotional framework that redefines the space of relationships and shows sisterhood as the seed of collective revolution.

Ana Barros is a stage designer, choreographer and dancer, actress and performer. She is the director and choreographer of the contemporary dance company ATOMICADANZA, which has created the works “BI-POLAR”, “TELÚRICA, Anatomía de Memoria” and the intervention in public space “Experimento BIPOLAR”. Her works in performance and scenic design have been presented in theaters, art galleries, museums and cultural centers, as well as in emblematic places such as Tacheles Berlin, Tanz Fabrik Germany, Museo de Bellas Artes de la Paz Bolivia and Museo de la Memoria y los Derechos Humanos, Santiago de Chile.