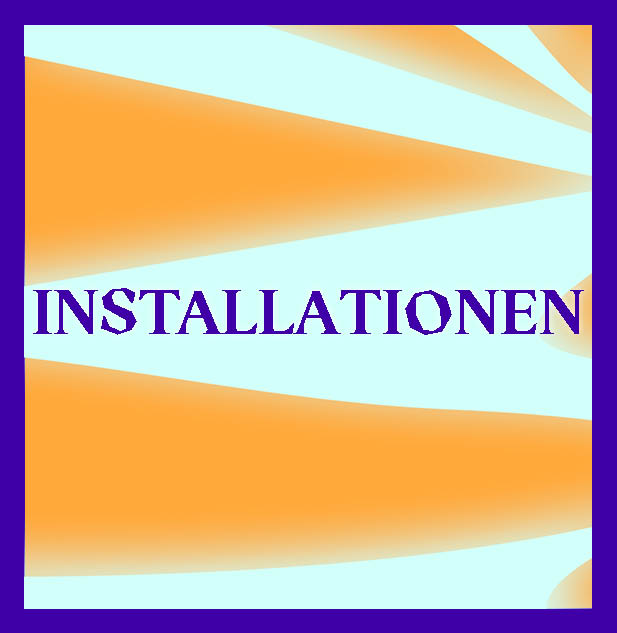 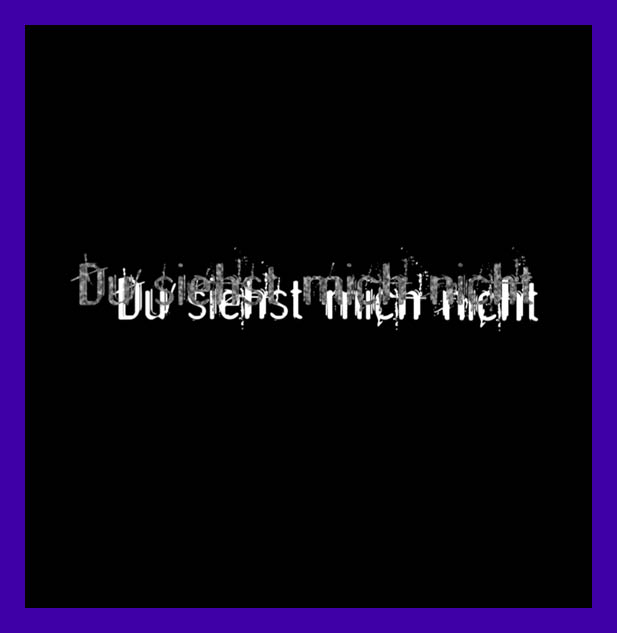 I need to say | Her Secret…

Invisible Spaces is an ongoing project developed within the framework of Kulturhauptstadt Ruhr 2010 (Ruhr 2010 Capital of Culture). It is dedicated to the investigation of phenomena where social, cultural, racist and gender-specific exclusion and taboo manifest themselves. The project uses artistic pieces to make visible these areas, which, like the penal system, are covered in silence or, like the people who have fled to us, are subject to a one-sided view. The participating women artists thus open up a space to be clear about their perception of the world, their ideas and projects and their conception of art and culture, and to put them up for public discussion. Their creations are artistic answers to the question of the very own invisible place.

A small selection of the work results, so to speak the uncovering of the female invisible places, is shown by the multimedia installation in the container.

A project by and with: 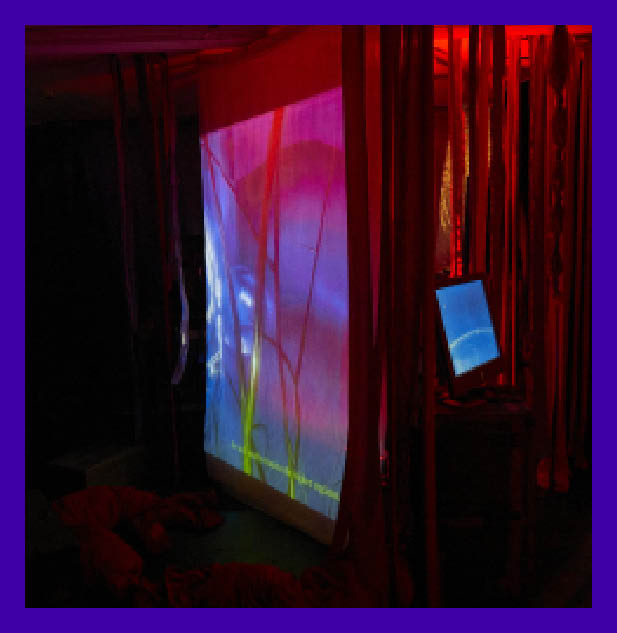 The exhibition displays the work of five women artists related to a central theme of this year’s festival: Self-construction and how it leads us into the future as a personal and artistic process.

We have followed a fil rouge through past, present and future perspectives represented by each artist’s work. These dimensions compose the three thematic sections of the exhibition: roots, eyes and wings. They lead visitors along a path that, contrary to the standard historical narrative, does not follow a straight line, but reflects the observation that each process of self-construction goes through trial and error, cycles, and overlapping images from past, present, and future.

For this reason, we have decided to exhibit the artworks in a space “in between“ that reflects these dimensions, thus also physically placing them in dialogue with the performance area of the festival. In addition, we want to encourage people to “ pass by“ unconventional places.

According to our intention, the result is a mosaic that opens an exchange process with multiple possibilities – as diverse as the futures themselves.

The exhibition will be open from Monday to Sunday from 5:00 p.m.  to 11:00 p.m., some of the artists will be present during the festival. 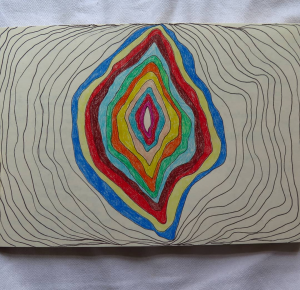 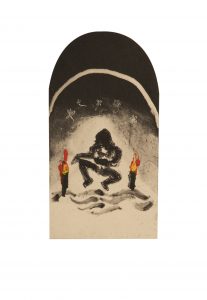 I lived in a cave until the age of seven. I grew up in Cales Coves, a prehistorical necropolis in the southern coast of Menorca, a small island in the Mediterranean Sea. Cales Coves cove counts with around one hundred excavated caves from the Talaiotic Period.

My childhood was lived in between the sea and the rocks; it was shared with my mother, my father, my three siblings and a small community formed by us and three more families. Our house never had a door, candles lit our cave, spring water was used as our shower, fire the way we stayed warm during winter. I don’t remember ever wearing shoes during summer, neither clothes. I remember climbing sea rocks and pine trees, swimming and feeling half human, half fish. I remember myself being brave, wild and free. CASA-CUEVA becomes a way of valuing my inner child and the mother who sought a more humane way of life for us.

The CASA-CUEVA art project is structured by a series of prints (monotype, linocut, etching, dry point), paintings and pottery sculptures in which I have worked through different elements revolving around my experiences in Cales Coves. In these pieces, cave, fire, natural elements, candles, sea, mother and sibling figure silhouettes can be appreciated. Printmaking has, intuitively, taken me to create shapes and styles that may remind one of primitive cave paintings. I like to believe that they are related to prehistorical cultures that lived in Cales Coves, when spirituality and connection with nature were very much present, and with who I feel identified, who I respect and admire for we shared, lived, and grew in the same space. Hence my will of   maintaining alive the ritual aspects Cales Coves carries, communicates and bears the gift of discovering the world and my early learning experiences in what would for me be a sacred place.

“Dear México,
Please, don’t wait until there are no women left to wake-up.”

More than 10 women are murdered everyday in México — 1 of these women is a girl
between 0-17 years old, 57% are killed by their partners. Only 3% of the assassins are
convicted. 99% of rapes go unpunished.

This project was born from the need of many women artists to do something
about this. What to do with our own hands, with our creative minds, with this rage, with
this disappointment, with this pain?
This situation needs to be known. The whole world needs to listen: “They are killing us!”
“We are in danger since the moment we leave home. Some of us, are not even safe
there.” “They are murdering us! And the police is doing nothing! They say it was the way
we dressed, that it was our fault. And the government is doing nothing! They call us
provocateurs.”

The purpose of this project was to allow our skin to speak.This skin that feels hot
with anger, cold with fear, and at the same time, warm with sorority. With the support of
many courageous women standing next to you, fighting for the country we deserve.
This was a collaboration between 38 women Artists in Mexico City; Actresses,
Photographers and Make-Up Artists.
It started with a text message. I shared this idea with my colleague actresses, they all
joined. Some of them shared the message and many other actresses joined too. One of
them called a Photographer, and she called two others. When I saw how fast this
collaboration grew, I called a friend who’s a make-up artist; and she called three others.
After the team was formed it took three days to create the pictures. One day for each
photographer, one make-up artist and 10 actresses. We all wrote words, numbers and
names in each others body. We are not alone, we will no longer feel alone. We were all
joined by creativity and power, by love and pain.

Artivism has shown us a way to be listened. Maybe not by all men, but by all women.
Let them know in a creative way that the violence against us is not normal and it has to
be stopped.
By standing up together.
By helping each other to stand.

This Photography Project was shared on June 2022 during the Transit Festival X
at Odin Teatret and shared for the first time on Women’s Day, March 8th, 2020 at 12:00
on Instragram, Facebook and Twitter with the #NoMeMiresLeeme.
Women from other states in México were also able to share their own photograph and
joined the campaign by using the Hashtag.
This is what we have to say:

*The remaining 13 photos were not shared due to outdated facts and statistics.
Unfortunately, the numbers keep rising.
To see the complete album, look for #NoMeMiresLeeme on Instagram and Facebook.

Created and Directed by: Camila Puerto 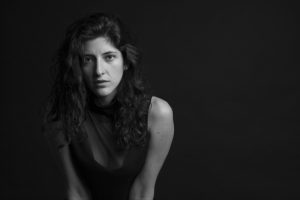 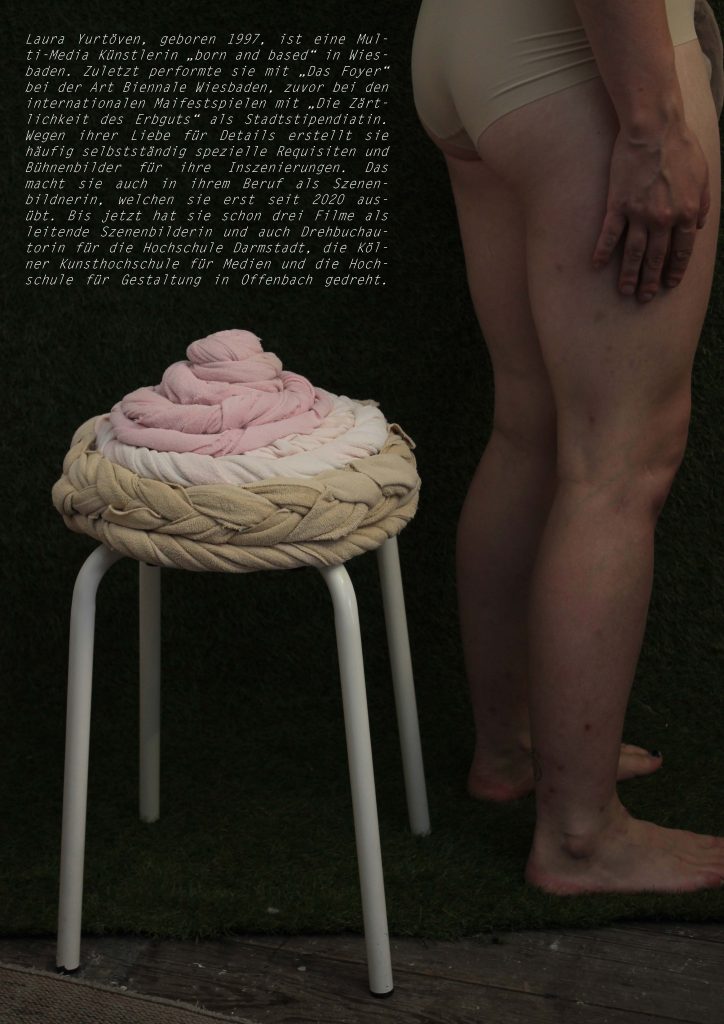