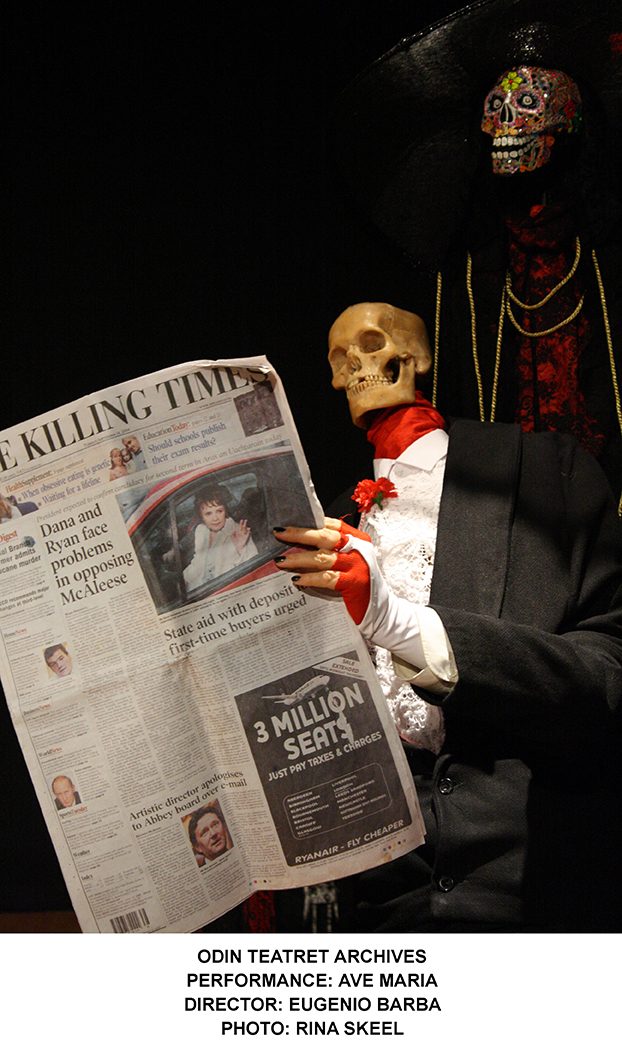 Three hundred steps in few instants.
Stone skin on my head.
The dead and the transparent flies –
what are they? And what do I matter?
Maybe death doesn’t take everything away.

These verses by the Italian poet Antonio Verri sum up the performance. The British actress Julia Varley evokes her meeting and friendship with the Chilean actress María Cánepa. Death itself celebrates the creative fantasy and dedication of María, who was able to leave a trace after her departure.

Julia Varley works as an actress at Odin Teatret in Denmark. Apart from acting she is active in directing, teaching, organising and writing. Before joining Odin Teatret she worked in Milan with theatre with Teatro del Drago, Centro Sociale Santa Marta and Circolo La Comune, and earned her living as an assistant film producer. With Odin Teatret, Julia Varley teaches in schools and universities and has synthesised her experience in four work demonstrations, among others The Echo of Silence.  Since its beginning in 1986 she has been active in The Magdalena Project, a network of women in contemporary theatre. She is also the artistic director of Transit International Festival, Holstebro, and editor of The Open Page, a journal devoted to women’s work in theatre. She has directed several theatre productions and worked as an assistant director for two films. Furthermore, Julia Varley has written two books: Wind in the West – a novel by a theatre character  and Notes of an Odin Actress – Stones of Water. Her articles and essays have been published in journals such as The Mime Journal, New Theatre Quarterly and Teatro e Storia.