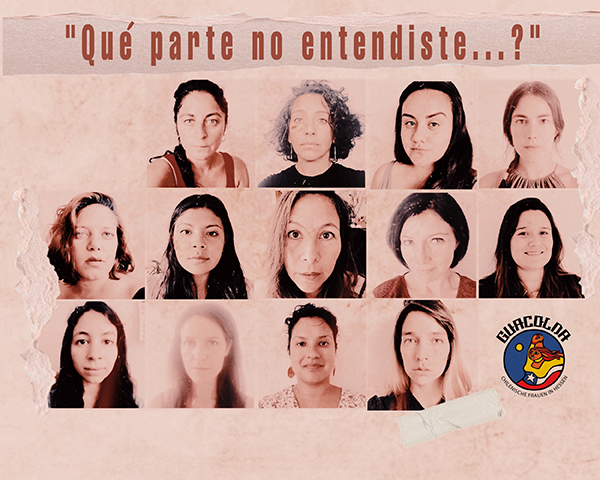 What did you not understand, the N or the O?

The performance deals with questions of identity politics and uses biographies of very different womyn as a starting point. What made us as Chilean womyn leave the country we grew up in and leave our families behind? Are there commonalities? What does life look like for other Latin American womyn in Germany? With diary entries, interviews, letters, voice messages, photos and videos, but also with audio tracks of demonstrations and television speeches, a sound collage is created, working with the slogans, hymns and songs that were created during demonstrations in the past months.

Guacolda Hessen is an activist group that was founded in late 2019 as a solidarity response to the social uprisings in Chile. As Chilean female migrants living in Hessen, Germany, they want to serve as a megaphone to point out gender inequalities, but also to create a space where they can exchange views on the everyday life of womyn and LGBTQs from South America. They want to learn from each other, encourage each other and network with other womyn groups. Their goal is to actively support the feminist movement with public interventions, to denounce the abuse against (Chilean) womyn and LGBTQs and to make visible their struggle against patriarchy.