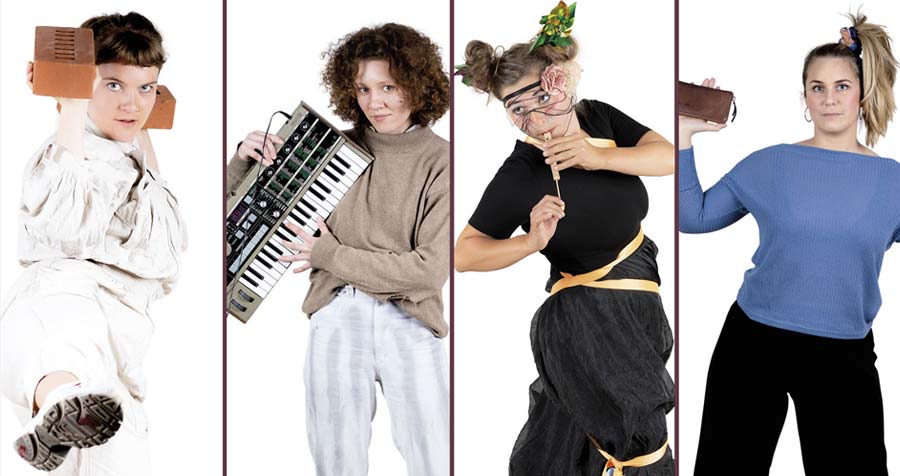 Women in Sound & Buy little buy less buy nothing at all

The title-giving monologue by the British author Claire Dowie describes the self-empowerment process of a city dweller (Luise Audersch) and accompanies her in her transformation from a consumption-driven primark fetishist to a woman who radically renounces the world of consumption, with all the consequences that entails. A live sound installation links the monologue with a story about female musicians of our time, including the pioneer of electronic music, Delia Derbyshire (Karla Hennersdorf).  Various documentary and fictional characters (Katharina Olt) cross the life path of the city dwellers and musicians. The evening follows the exciting and surprising encounters of these successful womyn whose processes of self-empowerment are interwoven, creating new perspectives on female identities, exposing and overwriting role stereotypes.

The Daedalus Company develops a special sound and light concept, adapted to the special seating concept which is necessary because of the corona distance rules.

DAEDALUS COMPANY is a professional independent theater ensemble based in Frankfurt. Since its foundation in 2010, the company has successfully presented eleven productions and has earned itself a firm place in the Frankfurt independent theater scene with high press attention and positive audience response. The founding members were Lynnette Polcyn, Christoph Stein, Maja Müller and Regina Busch. The stage plays are selected according to their social and political relevance and are therefore not tied to a specific epoch. As in the past, the Daedalus Company works conceptually with video and sound technology to highlight and transform content. The Daedalus Company also works regularly with associations and organizations that make controversial topics of the plays public beyond the theater space, thus continuing the theater as a contribution to current social discussions.